Favre May Need Ankle Surgery To Play In 2010 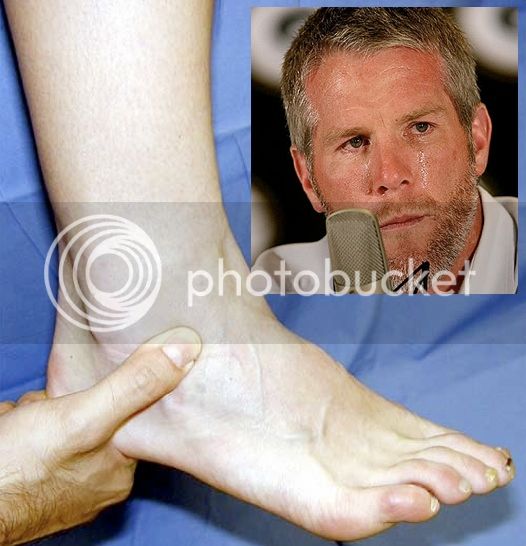 So more than 3 months after the Vikings NFC Championship lost against the Saints, Brett Favre’s shady ankle still isn’t healing properly and may require (minor) surgery in order for Favre to be able to play next season. Apparently Favre isn’t the biggest fan of going under the knife and is toiling with the decision to retire yet again. In an email sent to ESPN, Favre said:

This decision would be easy if not for my teammates and the fans and the entire Vikings staff. One year truly felt like 10 — much like Green Bay for many years. That’s what I was missing in my heart I suppose, a sense of belonging.

The Brett Favre retirement debate has been going on now for nearly half a decade, with the legend dominating offseason talk each of the past few years. It seems like this surgery issue is something that Favre could have easily addressed immediately following the end of the Vikes season, instead of waiting until damn near May for this news to drop. Favre could have already underwent the surgery and chillaxed for a few months, but then the focus would be on his recovery and whether or not the ankle will be strong enough to return. But now we are back to square one, with what looks like another summer wasted waiting for Favre to make a decision. Via ESPN

Check out Favre’s entire statement after the jump…

I want to add to the information provided in the article that was published this morning on ESPN’s website. Given the reaction to the article, and the typical conclusion jumping, I thought I’d clarify a few things.

While my ankle has been bothering me, the injury is not debilitating. For example, I’m able to work around my property without any problems. Sure – certain exercises cause some ankle pain, but it’s nothing that I haven’t experienced (or played with) before. In fact, many people don’t realize that I injured my ankle before the NFC Championship game. I’ve had surgery on this ankle twice before, and I’ve played with the pain before. The hits I took throughout the 2009 season, including the Saints game, just added to the ankle pain and likely caused some bone spurs.

I don’t believe major surgery on the ankle would be required for me to return in 2010. I’ve consulted with Dr. Andrews on the phone, and a relatively minor procedure could be done to improve the dexterity of the ankle, and to relieve the pain. I’ve put up with pain worse than this in my career, and I didn’t want anyone to assume that the possibility of surgery was the sole factor that would determine whether I return or not. Some people reacting to the ESPN story have made this assumption. I don’t blame them for doing so, given that the term “surgery” often covers a variety of procedures, some more complex than others.

The ankle pain is a factor, but one of many factors that I’ll need to consider in making my decision. Other factors include the input of my family, and the wonderful experience that I had last year with the Vikings.